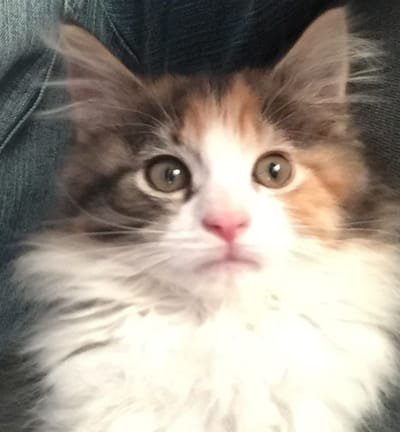 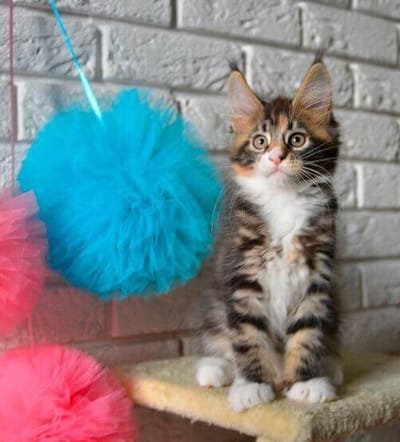 Maine Coons are the largest breed of domestic cat by most accounts. Males range from 13 to 20 pounds with females weighing in between 8 snd 13 pounds. They are not full grown for 3 to 5 years.

Maine Coons are a natural breed native to north America, specifically to Maine. Their exact origin is a bit of a mystery,  and thus surrounded by myth and folk tale. One such tale involves a daring  attempt made by Marie Antoinette to  escape execution in France.  She loaded her most prized possessions, her Angora cats, onto a ship to make the journey to the United States. Though she never arrived, her cats safely made it to the shores of  Maine where they bred with local short-haired cats.

Another theory poses that long-haired cats were brought to the shores of New England by Captain Charles Coon, an English seafarer. When long-haired kittens began appearing in the local population, they became known as  "Coon's cats."

The most accepted theory is the one closest to the Captain Coon story. Long-haired breeds brought over by the English or Norse bred with local domestic shorthairs. It would account for the Maine Coon's resemblance to Norwegian Forest cats that traveled with  the Norsemen.

However they got there, Maine Coons physically adapted to  harsh New England winters. They have a light undercoat with a silky topcoat designed by nature for warmth and water protection. Their raccoon-like tails can be wrapped around the face and body for extra warmth.  Large tufted paws act like snowshoes to keep them from falling through the snow and ice. Many Maine Coons love water, possibly due to their sea faring distant ancestors. Some will slap their water dishes, in an attempt to break a layer of ice on top (which is very amusing to watch, if a bit messy...).

These big beautiful cats have earned the nickname "gentle giants" for good reason. They are sweet, playful, and loyal. They are independent, and not clingy, but almost always present. They are happy to follow you around and help with your daily activities. (They are also happy to remind you of the error of your ways when you close a door leaving you on one side and them on the other.) Their gentle dispositions make them ideal around children, dogs and other cats. They communicate with chirps and trills far more often than with meows . The breed is highly social, and likes companionship from people and/or other animals. They remain playful and kitten-like throughout their lives. The boys tend to be a bit more clownish, while the girls have a bit more dignity. Both genders are affectionate and social. Maine Coons are also highly intelligent, and trainable. Many love to play fetch, and will walk on a lead. They are sometimes known as the dogs of the cat world. Personally, I think of them as the Maine Coons of the cat world, which is more than enough for me!